This is an article about a Human Rights Violation Victim of the Martial Law era. To view the rest of the Roll of Victims see this link: Roll of Victims

When he learned he was being considered to become Manila’s archbishop, Jaime Sin demurred, saying he never had a university education, all his studies having been completed in seminaries, he did not speak Tagalog, the language of the people of Manila and its environs, and that he was content to serve in Jaro. Nevertheless he became Manila’s archbishop in 1974, and two years later its cardinal, in which roles he would leave a unique mark in the movement to oppose the Marcos dictatorship. Until then he had been an unheard-of bishop from the Visayas.

One of Sin’s first acts as Manila archbishop was to issue a pastoral letter condemning the summary arrest of priests Jose Blanco and Benigno Mayo, both of the Society of Jesus, who were arrested in a raid on the Sacred Heart Novitiate in Novaliches. Sin presided over a prayer vigil for the detailed priests attended by 5,000 persons, the largest anti-martial law protest at that time.

Pope Paul VI made Sin a cardinal in 1976, succeeding then Rufino Cardinal Santos. Sin became the youngest member of the Vatican’s College of Cardinals. Later he served as vice-president of the Catholic Bishops Conference of the Philippines in 1974, was elected president in January 1977, and reelected president in July 1979.

Cardinal Sin soon became one of Asia’s most prominent religious leaders, known for his vocal stances on politics, economics and church concerns. He was courted and schmoozed over by the Marcoses. He set out to disarm the faithful, winning them over with jokes he cracked usually at his own expense.

Under his watch the Catholic Church became one of the few institutions where critics and opponents, human rights victims, and even rebels found shelter from the forces of the state. Because of his prominence, he commanded resources and exercised influence strong enough to counterbalance Marcos’ tremendous power.

He chose to wield this power when he issued a historic call for people to come to the aid of soldiers that had rebelled against Marcos and were holed up in Camp Aguinaldo. Thousands responded to this call, which grew into the movement that toppled the 14-year dictatorship.

Sin retired in 2003 when he turned 75, having served as priest for 29 years. He died of natural causes two years later. At his funeral, he was accorded full military honors and a 21-gun salute, the first time a clergyman was given the honor.

29 honorary degrees from different universities all over the world 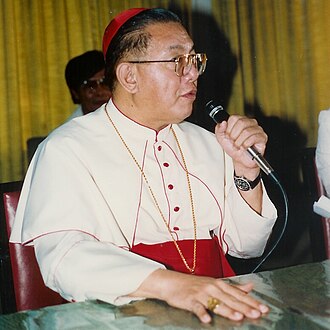